Donald Trump will cast a long shadow in September when Muslims across the U.S. gather to celebrate Eid al-Adha, known as the Feast of Sacrifice.

Now that Trump, whose anti-Muslim rhetoric has punctuated the campaign season, has secured the Republican presidential nomination, his candidacy could propel Muslim-Americans to head to the polls and vote against him.

“The rhetoric that Trump is putting out there is creating a lot of mobilization,” said Amaney Jamal, a politics professor at Princeton University who has studied Muslim American political participation and voting behavior.

In part to to help defeat Trump, Muslim organizations are banding together on Eid al-Adha to hold a national voter registration day at mosques and community centers in hopes of reaching their goal to register one million new voters.

And on Election Day, there will be plenty of buses on hand to take voters to cast their ballots.

While the U.S. Council of Muslim Organizations doesn’t endorse a particular candidate, if Trump doesn’t change his tone, the choice for Muslims will be obvious, said Oussama Jammal, secretary general of the council, who predicted Muslim American voter turnout would hit a historic high this year.

“Trump’s rhetoric has awakened the Muslim American community to their obligation and their right,” he said. So far, more than 300,000 new Muslim Americans have registered to vote, Jammal said.

Those voters are galvanized by what they see as a frightening and loathsome feature of Trump’s presidential campaign and troubled by the fact that never before in modern American history has this country had a major party presidential nominee whose campaign and supporters seem so hostile to Muslims.

Former House Speaker Newt Gingrich, a key Trump surrogate who was being considered as a vice presidential candidate, recently called for the U.S. to test Muslims to see if they believe in Sharia law and deport those who do.

And a Muslim-American Trump supporter who delivered the closing benediction at this week’s Republican National Convention was overshadowed by a delegate who shouted “No Islam” during his remarks.

During his big speech on Thursday night, Trump himself once again reiterated his call for suspending immigration “from any nation that has been compromised by terrorism”— a somewhat evolved version of his previous call to ban Muslims from entering the country entirely.

“What this election has done more than any other election is that it’s put Muslim-Americans in this category of non-whites. Muslim Americans are not only seeing themselves as being discriminated against but developing a group conscious with Latinos, blacks and the LGBT community” — groups who overwhelmingly vote Democratic — “that sees themselves as being marginalized,” said Jamal, the Princeton politics professor.

Muslims have previously been the least likely faith group to be politically engaged, according to the nonpartisan Institute for Social and Policy Understanding. A recent studyfound only 60 percent of Muslims who said they could legally vote were registered to do so, compared to a combined 86 percent of Jews, Catholics and Protestants.

But could Muslim Americans — who represent approximately 1 percent of the population in the U.S. — make a difference?

“The American-Muslim community is well positioned in swing states….And Muslims knowing that one presidential candidate is directly opposed to their community’s interest will be a driving factor in getting Muslims to turn out the vote,” he said. A CAIR survey after Super Tuesday found Islamophobia was the most important issue for Muslim voters.

Presumed Democratic nominee Hillary Clinton seems to be capitalizing.During Trump’s speech on Thursday, she noted on Twitter that the GOPer said “I’m with you.” She wrote, “*Not included: women, African Americans, LGBT people, Muslims, Latinos, immigrants.”

Before the 2000 election, Muslim Americans tended to vote Republican. In fact, approximately 70 percent voted for George W. Bush that year. But since the 9/11 terror attacks, the vote has swung largely to Democrats. In 2008, a CAIR poll showed almost 90 percent voting for Barack Obama.

“You’re going to see a similar trend, if not more this year,” said Jamal. “I wouldn’t be surprised if it was 95 percent this upcoming election.”

Trump — who has previously said “Islam hates America,” argued without any evidence that “thousands” of Muslim Americans celebrated 9/11, and called for surveillance of mosques in the U.S. — has softened some of his rhetoric towards the group. While last year he proposed banning all Muslim travel to the U.S., he has since called for “extreme vetting” of people from “territories” with a history of terror.

Trump’s campaign did not respond to requests for comment.

Of course, not all Muslims oppose Trump.

Take Sajid Tarar, the founder of American Muslims for Trump, who spoke at the convention and believes the GOPer will go after terrorist groups in a way that Obama hasn’t.

And Saba Ahmed, president of the Republican Muslim Coalition, said that while Trump’s proposed ban is “unconstitutional and illegal,” she’ll back the real-estate mogul because of his economic policies and business background.

“Obviously, people are scared what a Donald Trump presidency would mean,” she said from the convention in Cleveland. “But at the same time, we can get involved to influence his views. He’s a Washington outsider, he can be influenced and he’s worked with Muslims all of his life. He has several businesses all over the Middle East.”

Ahmed, who says her recently-formed group has about 100 members, says they too will have their own voter registration drives, particularly in key swing states. She attended a luncheon at the convention that was attended by Trump and his running mate Mike Pence.

She recounted telling Pence: “We let him know there is Muslim American support” for the ticket. 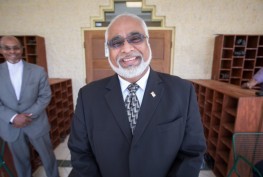 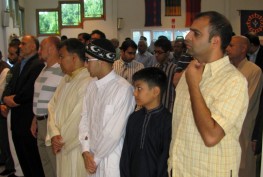 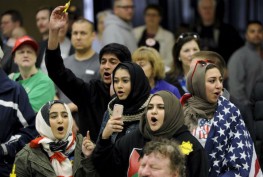 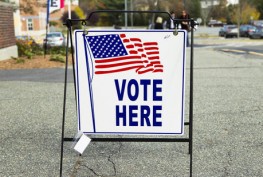