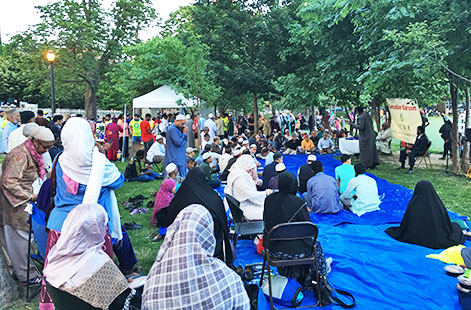 A crowd estimated at close to 600 Muslims and community residents shared an afternoon together in Rufus King Park in downtown Jamaica. The occasion was a Community Iftar (dinner) that follows the fast breaking by Muslims each day at sunset during the holy month of Ramadan.

This year, local Muslims were determined to share information about Islam and a meal with community residents by inviting them to an Iftar to break the fast with their Muslim neighbors. “We know that many people that are not Muslims don’t know what Ramadan is about,” said Abdus Salaam Musa, President of the South East Queens Muslim Collective. “We invited everyone, non-Muslims and Muslims to come to the park and spend a part of the day with us to hear about it from some speakers and enjoy some entertainment for the children ending in a humble meal to break some bread together, so to speak, when the sun goes down,” he added. Typically Iftars are held in homes and at masajid (mosques) nightly throughout the month followed by special prayers, Taraweeh, said only during Ramadan.

Ramadan, the ninth month in the Islamic calendar started on June 6th. It is spent, entirely, in acts of obedience, charity, fasting, prayer and sacrifice by Muslims globally. It begins with the sighting of the new moon, or more recently announced using scientific calculations of the new moon marking the onset of the month. Muslims go to work, attend school, play sports and perform other activities as usual, however the fast involves no drinking or eating and monitoring other behaviors as acts to please God and improve oneself physically and spiritually. Muslims do not engage in intimate relations, smoke or other actions that break the fast during the hours of daylight. At the end of the month and its 30 straight days of fasting, Muslims celebrate a feast called the ’Eid ul-Fitr (Feast of Fast Breaking) lasting for three days in which a special prayer is said on the first day of the ‘Eid that everyone should attend. Gift giving, visiting family and friends and many delicious traditional, cultural and festive food dishes and sweets are widely shared during these special days. This year, the ‘Eid feast and associated activities are anticipated to be held starting July 6th.

Saturday’s Iftar was sponsored by the Islamic Circle of North America (ICNA) and the South East Queens Muslim Collective (SEQMC) in collaboration with the New York City Commission on Human Rights. Local elected officials including Councilman I. Daneek Miller and Senator Leroy Comrie served as supporters of the Iftar as well as several local organizations. ICNA subsidiaries Helping Hands, ICNA Relief and the ICNA Council for Social Justice among others including The Tauhid Center for Islamic Development, Al-Khoei Foundation, Humanity Services, Team Deuce Sports, Muslim Ummah of North America and the North American Bangladeshi Community were co-sponsors.

Representatives from the Mayor’s Office and the Queens Borough President’s office also brought greetings and information to the audience. A special part of the program included an award presented to Pascale Bernard, Deputy Commissioner of Community Relations for the New York City Commission on Human Rights for her “undying willingness and tireless energy to serve and promote cooperation and participation among diverse communities in New York City.” Ms. Bernard shared how the Commission on Human Rights had collaborated with ICNA and SEQMC on three events in the past.

“We’d also like to convey our appreciation for the support and assistance of the Parks Department staff and the 103rd Precinct Community Affairs of the New York City Police Department that helped our planning for our first Community Iftar in the park today, “added Muhammad T. Rahman, Secretary General of ICNA and a member of SEQMC who was especially pleased with the large turnout and the diversity of the crowd. Many park visitors gathered information from the booths and tables as well as enjoyed lollipops, children’s balloons and face painting, and elaborate henna hand designs for women offered by event volunteers.

As sunset approached close to 8:30 PM and time to break fast, Tavasha Shannon, known as “Miss Undastood,” a female Muslim rapper who has shared her lyrics and spoken word throughout Muslim communities in New York City and around the country displayed her talent reciting a rap about Ramadan and its virtues, challenges and rewards. Heads bobbed up and down with the rhythmic beat of her words. A few minutes later sixteen hours of fasting came to a close as dates and water were eagerly eaten by those that had fasted throughout the day. Imam Aiyub Abdul Baqi of the Tauhid Center for Islamic Development led the Maghrib (evening prayer) after which hundreds of meals of chicken, lamb and seasoned rice was distributed. As promised to the Parks Department, the park was cleaned and cleared by 9:00 PM although with quite a bit of haste. “We want to have another Community Iftar in the park again next year,” said Bro. Musa with a big smile. 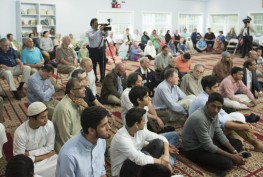 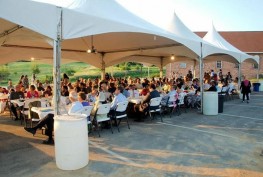 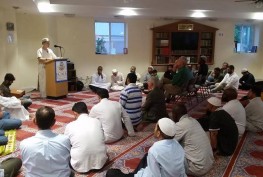 Warning: count(): Parameter must be an array or an object that implements Countable in /home/america/public_html/wp-includes/class-wp-comment-query.php on line 399